Pedagogy of the Oppressed, Paulo Freire (1968) 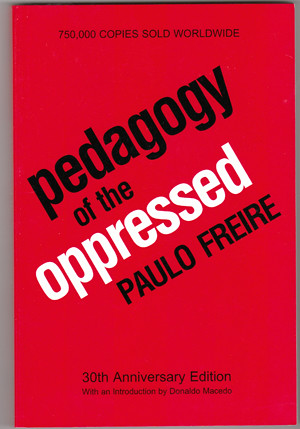 One of the foundational texts of critical pedagogy, Pedagogy of the Oppressed was a revolutionary text. Paulo Freire takes a hatchet to traditional methods of pedagogy with the aim of creating a new kind of education. For Freire, “Education either functions as an instrument which is used to facilitate integration of the younger generation into the logic of the present system and bring about conformity or it becomes the practice of freedom, the means by which men and women deal critically and creatively with reality and discover how to participate in the transformation of their world.” His book aimed for the second category.

Freire had spent years helping adult Brazilians learn how to read and write. And his experience developed a staunch belief that education had to change. “No pedagogy which is truly liberating can remain distant from the oppressed by treating them as unfortunates and by presenting for their emulation models from among the oppressors. The oppressed must be their own example in the struggle for their redemption”

You can find copies of the text on Google Scholar.