Shop Class as Soulcraft: An Inquiry Into the Value of Work, Matthew Crawford (2008) 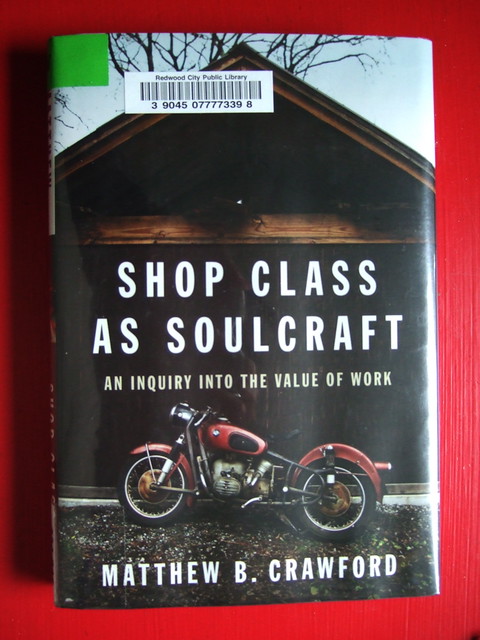 Writing for Slate.com, Michael Agger introduces Shop Class as Soulcraft: An Inquiry Into the Value of Work thus: “When Matthew Crawford finished his doctorate in political philosophy at the University of Chicago, he took a job at a Washington think tank. “I was always tired,” he writes, “and honestly could not see the rationale for my being paid at all.” He quit after five months and started doing motorcycle repair in a decaying factory in Richmond, Va. This journey from philosopher manqué to philosopher-mechanic is the arc of his new book.”

Crawford, describing his own book, says that it “advances a nestled set of arguments on behalf of work that is meaningful because it is genuinely useful. It also explores what we might call the ethics of maintenance and repair.”

The book began as an essay in The New Atlantis, a journal of technology and society. In the essay, Crawford writes, “Craftsmanship entails learning to do one thing really well, while the ideal of the new economy is to be able to learn new things, celebrating potential rather than achievement. Somehow, every worker in the cutting-edge workplace is now supposed to act like an “intrapreneur,” that is, to be actively involved in the continuous redefinition of his own job. Shop class presents an image of stasis that runs directly counter to what Richard Sennett identifies as “a key element in the new economy’s idealized self: the capacity to surrender, to give up possession of an established reality.””